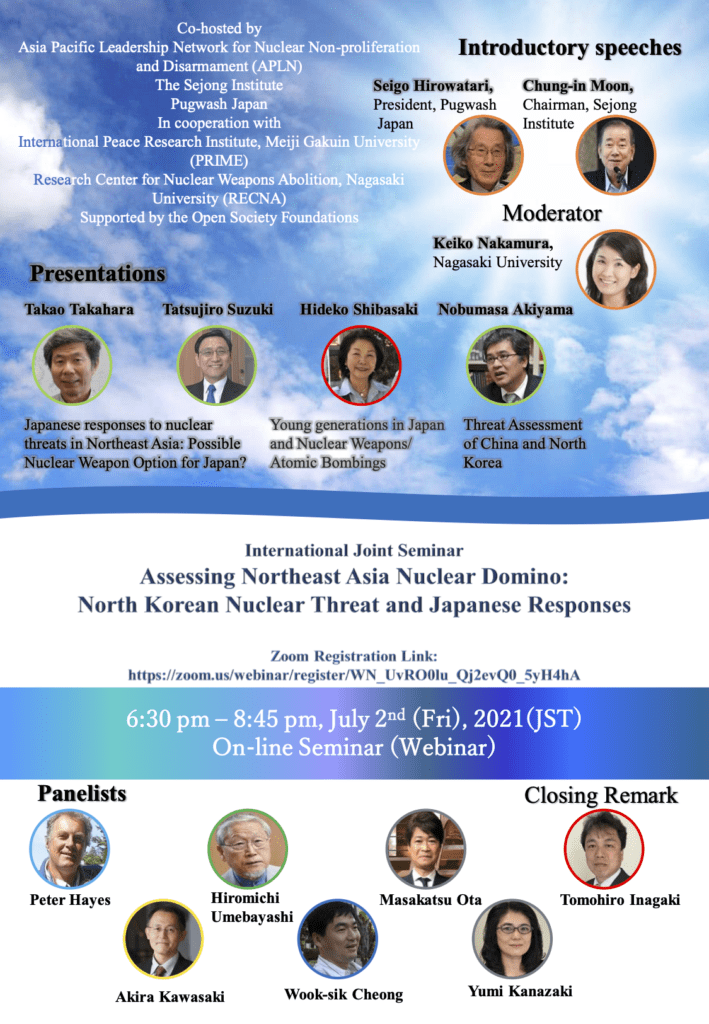 This workshop was originally proposed by Asia Pacific Leadership Network for Nuclear Non-proliferation and Disarmament (APLN) to assess possible responses of Republic of Korea and Japan to nuclear threats from Democratic People’s of Republic of Korea (DPRK) in 2020. Due to COVID-19 pandemic, the workshop was postponed to this year.
Now the workshop is jointly organized by APLN, Sejong Institute of ROK, and Pugwash Japan. It is intended to exchange frank opinions on this issue among experts, NGOs and parliamentarians from both countries.

This is the second series of three workshops and the first one was held in Seoul on May 14, 2021. And the third one is now planned to be held in Seoul in November 2021.
Pugwash Japan is hosting this second workshop (on-line).

Please see the here about this program agenda and detailed information.

2021 Posters of “The World’s Nuclear Warheads Count” and “The World’s Fissile Material Inventory” were released. Please click on the thumbnail images below and download the pdf posters.

>> Posters before 2021 can be downloaded from here.

>> Posters before 2021 can be downloaded from here.

Video Teaching Material: “The Origin of Violence and War: Considering Human Evolution from the Perspective of Gorillas” released!

This video is an edited version of a special lecture “The Origin of Violence and War: Considering Human Evolution from the Perspective of Gorillas” by Juichi Yamagiwa, former President of Kyoto University, at the Special Symposium “Peace and Disarmament Education in an Emerging Era of the Treaty on the Prohibition of Nuclear Weapons” (November 25, 2020) commemorating the 75th anniversary of the atomic bombing, hosted by the Research Center for Nuclear Weapons Abolition, Nagasaki University (RECNA).

< Speaker’s bio >
Born in Tokyo in 1952. He obtained his Doctor of Science degree from Kyoto University’s Graduate School of Science. Currently, Dr. Yamagiwa serves as the president of the Japan Monkey Center museum. He has served in a number of senior positions, including the 26th president of Kyoto University, the president of the Japan Association of National Universities, the president of the Science Council of Japan, the president of Japan Primatological Society, and the president of International Promatological Society. His major research interests are primatology and human evolution, fields that have led him to spend considerable time in Africa conducting research on gorillas. His published works include “The origin of violence“(“Bouryoku wa doko kara kita noka?,” NHK publishing, 2007), “Evolution Theory of Family (“Kazoku shinka ron,” University of Tokyo Press, 2012), “The Simianization of Human Society” (“Saruka suru ningen shakai,” Shueisha, 2014), “A Warning from the Gorillas: some problems in human society” (“Gorira kara no keikoku: ningen shakai, kokoga okashii,” Mainichi Shimbun Publishing, 2018), “Children who wish to throw away their mobile phones” (“Smaho wo sutetai kodomo tachi,” Poplar Publishing, 2020), and “I ‘ve learned all important things in life from gorillas” (“Jinsei de daiji na koto wa minna gorira kara osowatta,” Ienohikari kyokai, 2020).

RECNA’s Website will be performing server maintenance on the following dates.

During maintenance, RECNA’s website may be temporarily unavailable for viewing.
We apologize for the inconvenience and thank you for your cooperation.

Seung-Chan Boo is a spokesperson for the ROK Ministry of National Defense. He co-authored this article as a research fellow of the Institute for North Korean Studies, Yonsei University, before he joined the ministry.
Chung-in Moon is the Chair of the Sejong Institute, vice-chair of the APLN and a distinguished university professor of Yonsei University. He served as special advisor to the ROK President for Unification, Foreign and Security Affairs (May 2017- Feb. 2021).

The Korean conflict has been one of the most protracted in the world, lasting more than 70 years. Despite the heightened tension, there was no channel of communication between the North and the South. It was only on September 22, 1971, that the first hotline between the two Koreas was installed at the Panmunjom—26 years after the telephone line between Seoul and Haeju was cut off by the former Soviet army immediately after liberation on August 26, 1945.
Since 1971, a total of 50 lines were open, including a hotline between leaders of the two Koreas as well as military and intelligence communication lines. But North Korea suddenly cut off all communications with the South with the exception of that between the United Nations Command (UNC) and North Korea military. Nevertheless, they proved to be useful tools for confidence-building measures to improve inter-Korean communication, to facilitate exchanges and cooperation, including inter-Korean official talks, and to assist the promotion of humanitarian aid. More importantly, they have served as an effective mechanism for the prevention of accidental military clashes through a timely exchange of information. This paper presents a brief historical overview of hotlines between the two Koreas, examines their present status, and elucidates limitations and future tasks.

NOTE: RECNA publishes this paper as a special Working Paper with a permission from the Nautilus Institute.

It is published simultaneously by RECNA-Nagasaki University, Asia Pacific Leadership Network for Nuclear Non-proliferation and Disarmament (APLN), and Nautilus Institute and is published under a 4.0 International Creative Commons License the terms of which are found here.

The DPRK’s Covid-19 Outbreak and its Response
SHIN, Young-jeon

Shin, Young-jeon, is a professor at the Department of Preventive Medicine at Hanyang University School of Medicine, Seoul Korea. He is the Chief Editor of Health and Social Welfare Review and a Board Member of the Academy of Critical Health Policy and the Korean Association of Preventive Medicine.

On January 25, 2020, the DPRK shut down its border, switched to a state-run emergency quarantine system, organized a pan-ministerial organization, the Central People’s Committee for Health (CPCH), and established emergency command centers for epidemic response (ECCER) in provincial, county, and Ri-levels. Until now, it has continued to take the strongest Covid-19 quarantine measures in the world, including restricting cross border and regional movement.

The DPRK responded swiftly and strongly to past major outbreaks such as SARS (2002-2003), measles (2006-2007), swine flu (2009-2010), Ebola (2013-14), and MERS (2015), as well as the periodic outbreak of typhoid fever, cholera, etc. In response to the coronavirus outbreak, the DPRK drew on its experience to implement aggressive measures such as border blocking, strengthening disinfection, and quarantine, as in response to past large-scale epidemic threats.

Research Center for Nuclear Weapons Abolition, Nagasaki University (RECNA) issued “RECNA’s Statement on the Entry into Force of the Treaty on the Prohibition of Nuclear Weapons (TPNW) on January 22, 2021.

Our Articles in the Institutional Repository “NAOSITE” has Become Available Again!

Server migration of the institutional repository “NAOSITE” has been finished and our articles has become available from JAIRO Cloud. All articles in the “NAOSITE” are accessible through IRDB.

Following the server migration, we have renewed the links on the web pages below on our site.

When you send enquiries to RECNA by e-mail, please be sure to write your name in the e-mail. Otherwise, we might not be able to reply. Thank you for your understanding.

Temporary Unavailability of Our Articles in the Institutional Repository “NAOSITE”

Due to server migration, the Institutional Repository “NAOSITE” is temporarily not accessible from off-campus. Our articles under the categories below are now unavailable from there. Please wait a little longer, as we are planning to reopen the repository on a different server (JAIRO Cloud) in January. We apologize for the inconvenience and thank you for your cooperation.

When you send enquiries to RECNA by e-mail, please be sure to write your name in the e-mail. Otherwise, we might not be able to reply. Thank you for your understanding.