Of the nuclear weapon states under the NPT, the UK is known to have the smallest nuclear arsenal. It possesses only one type of nuclear weapon, the Trident submarine-launched ballistic missile (SLBM).

On March 16, 2021, the Johnson ministry presented a review of integrated security and diplomacy including a wide-sweeping bolstering of nuclear capability entitled “Global Britain in a Competitive Age: the Integrated Review of Security, Defence, Development and Foreign Policy” (Government of the U.K. 2021). As discussed below, this policy review reverses the policy of reducing nuclear warheads to 180 or less by the mid 2020s, and instead places a ceiling on warheads of 260. This is a policy change that stands the hitherto reduction policy on its head, and is against the agreements under the NPT. It will doubtless spark major international discussion and repercussions in the future.

On May 26, 2010, the British government announced to its Parliament that its stockpile of Trident missile warheads, the only nuclear weapons in its possession, would not exceed 225 warheads in number, and that the number of nuclear warheads it would keep operational would be 160 or less (Hague, William 2010). On October 19, 2010, the British “Strategic Defence and Security Review” (SDSR) reconfirmed the upper limit of 225 warheads and further stated that the number of warheads would be reduced to 180 or fewer by the mid-2020s (Government of the U.K. 2010). On January 20, 2015, during a parliamentary session, it was revealed that operationally deployed warheads had been reduced to 120. This figure was also confirmed in a government report submitted to the 2015 NPT Review Conference (Government of the U.K. 2015-1). In November of the same year, HM Government’s report to parliament (Government of the U.K. 2015-2), noting the reduction again, also reaffirmed continuous at-sea deterrence (CASD), which maintains one submarine at all times on patrol duty.

However, in the course of the explanations of the Johnson ministry’s “integrated review,” it became clear that the figure of 180 or less was merely a target and that there had been no change in the setting of a ceiling at 225 warheads (Kristensen, Hans M. & Korda, Matt 2021). It should be noted that while the Johnson ministry intends to increase the U.K.’s number of warheads it will maintain its continuous at-sea deterrent (CASD) policy (Government of the U.K. 2021).

The latest estimates of the number of warheads has, based on the foregoing events, been raised from the hitherto 195 to the U.K. government’s ceiling of 225 (Kristensen, Hans M. & Koda, Matt 2021).

The UK is in the process of providing its only nuclear weapon with a next-generation upgrade. While the UK’s next-generation Dreadnought class of strategic nuclear submarine entered the design phase in 2011, its construction has been delayed. In 2019 the U.K.’s Ministry of Defence stated that the first Dreadnought class submarine would come into service in the early 2030s, and the latest review also states this policy (Government of the U.K. 2021). The Anglo-American development, in progress, of a warhead for the Dreadnought class was initially revealed in the United States, and confirmed on February 25, 2020, by HM Defence Secretary Ben Wallace (Chuter, Andrew 2020).

The running cost of the Trident programme is currently GBP 2 billion (JPY 290 billion) per annum. The construction cost of a new submarine is GBP 31 billion (JPY 4.5 trillion). In addition, it will likely cost the UK further GBP 1.2-1.4 billion to maintain its current nuclear submarines into the 2030s (Fenton, Janet 2018). Furthermore, one calculation puts the U.K.’s total spending on nuclear weapons from 2019 to 2070 at GBP 172 billion (JPY 26 trillion) (Fenton, Janet 2020). 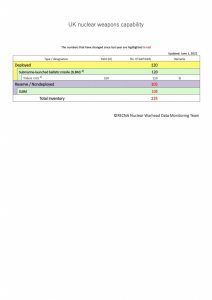 1) Carried by four Vanguard-class* strategic nuclear submarines. Whereas each is capable of carrying 16 Trident II (D-5) missiles, the per-vessel capacity is now being reduced both to eight missiles and 40 warheads (from 48) (Government of the U.K. 2015-1 and 2015-2). One vessel is continuously on sea patrol for deterrent readiness (CASD: Continuous At-Sea Deterrent) (Kristensen, Hans & Norris, Robert S. 2011 and Fenton, Janet 2019). A single missile is armed with an average of five warheads.

* Vanguard-class submarine: These are the latest strategic nuclear submarines made in the U.K., and there are four of them. The first of this class, the Vanguard, was deployed operationally in December 1994, the second, the Victorious, in December 1995, the third, the Vigilant, in June 1998, and the fourth and last, the Vengeance, in February 2001. The design service life is said to be 25 years (Ainslie, John, 2016). Accordingly, the first ship will have reached its end by 2020.

2) The D-5 is made in the U.S. and has a range of 7,400 km. The U.K. maintains 50 of them. This is an adequate number for three vessels with 48 missiles in total. Whereas one D-5 can carry a maximum of 12 warheads, five warheads are carried on average, as cited above. These W76s are equivalent to the U.S. W76 and, while the other key components are sourced from the U.S., their high explosive is UK-manufactured. So this is a joint Anglo-American product (Ainslie, John 2015).
In June 2016, a D-5 was test-fired from a submarine, for the first time in four years, off the coast of Florida but the outcome was a failure. The fact remained undisclosed until January 2017, when it was leaked to the press, creating political fallout (BBC 2017).

3) The nuclear submarine on patrol carries 40 warheads, and the count of operational warheads for three vessels are 120 warheads. This means that the 2010 reduction plan was completed within five years as projected.

Government of the UK 2010: “Securing Britain in an Age of Uncertainty: The Strategic Defence and Security Review,” October, 2010 https://assets.publishing.service.gov.uk/government/uploads/system/uploads/attachment_data/file/62482/strategic-defence-security-review.pdf (accessed May 3, 2021)

Government of the U.K. 2021: “Global Britain in a competitive age – The integrated Review of Security, Defence, Development and Foreign Policy,” March 2021 https://assets.publishing.service.gov.uk/government/uploads/system/uploads/attachment_data/file/975077/Global_Britain_in_a_Competitive_Age-_the_Integrated_Review_of_Security__Defence__Development_and_Foreign_Policy.pdf (accessed May 3, 2021)