The nuclear and missile capabilities of the Democratic People’s Republic of Korea (North Korea) continue to become enhanced but there are varying estimates regarding their strengths. For example, RAND Corporation, a U.S. think tank, and the South Korean Asan Institute for Policy Studies predicted that in an April 2021 report that in 2020 North Korea had between 67 and 116 warheads, and that this amount would increase to reach between 151 and 242 in 2027 (Bennett, Bruce W. et.al 2021). Elsewhere, Dr. Siegfried Hecker of Stanford University said in an April 30, 2021 interview with the 38 North site, which analyzes North Korea, that “20 to 60 is possible, with the most likely number being 45,” (38 North 2021). Few nations have made any official pronouncements, but the U.S. Defense Intelligence Agency (DIA) estimates the maximum size of the North Korean arsenal currently to be 60 warheads (Nikitin, Mary Beth D. & Ryder, Samuel D. 2021). In addition, in October 2018 the South Korean Minister of Unification, Cho Myoung-gyon, said that the Ministry’s Intelligence and Analysis Office believed North Korea had between 20 and 60 warheads (Kim, Hyng-jin 2018). Our estimate here of the North Korean stockpile, as of June 2021, is 40 warheads.

North Korea, with its research facility in Nyeongbyeon as the hub, continues to produce plutonium and highly enriched uranium (HEU), and fissile materials for nuclear weapons (Nikitin, Mary Beth D. & Ryder, Samuel D. 2021、International Atomic Energy Agency 2021、United Nations Security Council 2021). The International Panel on Fissile Materials (IPFM) estimated in 2020 that the current amount of weapons-grade plutonium owned by North Korea was 40kg (International Panel on Fissile Materials 2021). In addition, with regard to the amount of highly-enriched uranium (HEU) in its possession, the panel introduced a wide range of expert opinions that put the figure at between 400kg and 1,000kg (International Panel on Fissile Materials 2020). In the above-mentioned interview Hecker estimated that North Korea has between 25kg and 48kg of plutonium, and as of the end of 2020 between 600kg and 950kg of HEU (38 North 2021). Others claim North Korea to be capable of annually manufacturing fissile materials for about seven warheads (Arms Control Association 2018、Nikitin, Mary Beth D. ＆ Ryder, Samuel D. 2021). In any case, information surrounding the North Korean stockpile remains opaque.

North Korea has conducted six nuclear weapon tests: October 2006, May 2009, February 2013, January and September 2016 and September 2017. The last of these, a thermonuclear weapon, is estimated to have yielded 200kt. North Korea has conducted no further nuclear tests since then, for more than three years, but a report released on April 9, 2021 by the U.S. Office of the Director of National Intelligence (ODNI) suggested that “Kim Jong-un may be considering whether to resume long-range missile or nuclear testing this year to try to force the United States to deal with him on Pyongyang’s terms.” (Office of the Director of National Intelligence 2021).

There is no publicly disclosed information suggesting that they have operationally deployed nuclear warheads. Analysis by many governmental/non-governmental organizations, however, agrees that North Korea is already technically proficient in miniaturizing warheads. The Japanese Government, in its “National Defense Program Guidelines for FY2019 and Beyond” in late 2018, stated: “Given technological maturity obtained through a series of nuclear tests, North Korea is assessed to have already successfully miniaturized nuclear weapons to fit ballistic missile warheads” (MOD 2018). Furthermore, the annual report compiled by the Expert Panel Assisting Sanctions Committee on Democratic People’s Republic of Korea, released in March 2021 states, based on the analyses of various nations that “it is also likely that a nuclear device can be mounted on the medium-range ballistic missiles and short-range ballistic missiles,” but unclear whether or not the nation has reached the stage of developing missile reentry technology (United Nations Security Council 2021).

In light of diplomatic developments toward the denuclearization of the Korean Peninsula, mainly between North Korea and the United States, North Korea halted ballistic missile test launches of ballistic missiles after the last test, dated November 29, 2017, of the KN-22 (Hwasong-15). Following the subsequent stagnation of diplomacy, North Korea resumed test launches in May 2019. To date, while it has yet to breach the self-imposed moratorium on ICBMs and IRBMs, test launches continue quite frequently with short-range ballistic missiles and rocket artillery. Of the latter, two SRBM types, the KN-23 fired in May 2019 and the KN-24 in August, are both suspected of being nuclear-capable (e.g., Van Diepen, Vann H. & Depetris, Daniel R. 2019, Kile, Shannon N. & Kristensen, Hans M. 2020). On October 2, 2019, the country followed up with the test launch of Pukkuksong-3, a new SLBM which has the longest range for any solid-propellant missile in North Korean development (Elleman, Michael 2019). In his address to the 8th Congress of the Workers’ Party of Korea in January 2021 Chairman Kim Jong Un mentioned in detail the developmental state of the nation’s nuclear weapons and missiles including the development of strategic nuclear weapons, clearly indicating the nation’s stance of pursuing nuclear weapon and missile expansion. The first ballistic missile launch test since the Biden administration came to power was carried out on March 25, 2021, and it was reported on April 11 that the construction of a new submarine apparently capable of being armed with SLBM had been completed (Yonhap News Agency, 2021). 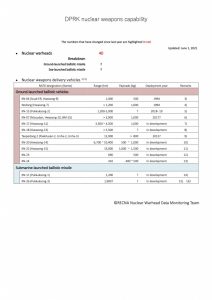 2) Except a Taepodong-2 missile which is launched from a silo, all ground-based ballistic missile are launched from road-mobile platforms.

8) Intercontinental ballistic missile (ICBM). Three-stage. Liquid-propellant. It marked its public debut in a military parade on April 15, 2012. There are no reports to date of its test launch. Even though it was initially considered a parade mockup, some observers suggest actual development in progress (Missile Defense Project 2018).

9) Satellite launch vehicle (SLV) (It is thought it could be reconfigured and used as an ICBM). Three-stage. Liquid-propellant. The first launch test in 2006 was a failure. It is thought that North Korea attempted test launches of a projectile with the aim of launching an artificial satellite on April 5, 2009 and April 13, 2012, both of which ended in failure. They announced that they had succeeded in launching a satellite on December 12, 2012. The U.S. has identified “some sort of flying object” in orbit. On February 7, 2016, North Korea announced it enjoyed a successful launch of the Kwangmyongsong (KMS) 4, an earth observation satellite.

11) Intercontinental ballistic missile (ICBM). Two-stage, liquid propellant. The very first launch, on November 29, 2017, scaled a lofted trajectory of 4,500km in altitude and 960km in range, landing 250km off the west coast of Japan’s Aomori Prefecture, within the country’s EEZ. An equivalent normal trajectory would have been 13,000km (Wright, David 2017-7). This is North Korea’s largest missile ever among all those test-launched and its range is said to cover the United States mainland.

12) Short-range ballistic missile (SRBM). Range and payload data from Missile Defense Project 2020-1. Single-stage. Road-mobile. Solid propellant. It made its first appearance on February 8, 2019, in a military parade, followed by its first (single missile) test launch on May 4. Further tests ensued, two missiles on May 9, two more on July 25, and another two on August 6, a total of four times. North Korea refers to it as a “new-type tactical guided weapon.” In design it closely resembles the Iskander-M, Russia’s SRBM, as many observers have pointed out. Flying in a “quasi-ballistic trajectory” at a low altitude of about 50km, it is similarly capable of breaching missile defense (Lewis, Jeffrey 2019). At the military parade held on January 14, 2021 to coincide with the 8th Congress of the Workers’ Party of Korea, the KN-23, -24 and -25 were seen (Dahlgren Masao 2021). The ballistic missiles launched on March 25, 2021 appears to have been a variant of the KN-23 (Van Diepen, Vann H. 2021). North Korea asserted that it has a payload of 2,500kg and flight range of 600km, but this is thought to be an overstatement (Van Diepen, Vann H. 2021). The Japanese Ministry of Defense puts its flight at around 450km (Ministry of Defense 2021).

13) Short-range ballistic missile (SRBM). Range and payload data from “Single-stage, road-mobile, solid propellant,” Missile Defense Project 2020-3. The first test launch took place on August 10, 2019. Two more tests followed, on August 16 and March 21, 2020. Like the KN-23, it flies in a “quasi-ballistic trajectory.” According to a release from South Korea’s Joint Chiefs of Staff (JCS), the March 31 launch flew “around 410 kilometers, reaching a maximum altitude of around 50 km” (Oh, Seok-min 2020). Though larger in size, the KN-24 resembles the US MGM-140 Army Tactical Missile System (ATACMS) in design and may be capable of housing a nuclear warhead (Elleman, Michael 2020). North Korea calls it a “tactical guided weapon”.

14) Submarine-launched ballistic missile (SLBM). Two-stage (Missile Defense Project 2019), solid propellant (originally thought of as a sea-faring variant of the liquid-fueled Musudan (Hwasong-10), but categorized subsequently as a unique type due to its solid propellant). An underwater launch into the air is believed to have been conducted in April 2015. According to North Korea, it was launched by a submarine. Two failures are dated May 8 and November 28 of the same year. A similar launch test on December 21 is believed to have been underwater (Umebayashi, Hiromichi 2016). The very first SLBM launch from a submarine took place on April 23, 2016, in the waters near Sinpo. The range then attained, 30km, is thought to have been a failure. Similar SLBM tests took place on July 9 and August 24 in the same year. It is reported that a third test achieved a flight distance of 500km (NTI 2018).

15) Submarine-launched ballistic missile (SLBM). Two-stage, solid propellant. First launched on October 2, 2019. Believed to have been fired from a submersible barge, not a submarine (Elleman, Michael 2019). Scaling an altitude of 950km and covering 450km, the test launch touched down in Japan’s exclusionary economic zone (EEZ). In a usual trajectory, its maximum range is said to be 1,900km (Panda, Ankit 2019), which will be the longest range for any solid-fueled missile ever test-fired by North Korea to date (Elleman, Michael 2019). “The successful new-type SLBM test-firing is of great significance as it ushers in a new phase in containing the outside forces’ threat to the DPRK and further bolstering its military muscle for self-defense,” according to the Korean Central News Agency (KCNA) (Lee, Joyce 2019). One analysis states that the missile is ready for operational deployment (Missile Defense Project 2020-4).

16) On April 11, 2021 the Yonhap News Agency reported that according to analyses by South Korean and U.S. intelligence agencies the construction of a new submarine capable of carrying SLBM such as the Pukkuksong-3 had been completed (Yonhap News Agency 2021). The same article also suggested that North Korea was constructing a large new submarine and hinted at the possibility it would be used to carry Pukkuksong-4 and Pukkuksong-5 missiles (Yonhap News Agency 2021). The Pukkuksong-4 first appeared at the military parade to celebrate the 75th anniversary of the establishment of the Workers Party of Korea, and the Pukkukusong-5 at the military parade held on January 14, 2021 to coincide with the 8th Congress of the Workers’ Party of Korea. However, neither of them have been test launched.

Office of the Director of National Intelligence 2021: “Annual Threat Assessment of the US Intelligence Community,” 9 April 2021, https://www.dni.gov/files/ODNI/documents/assessments/ATA-2021-Unclassified-Report.pdf (accessed April 15, 2021)