On February 7, 2020, Emmanuel Macron gave a speech on France’s “Defense and Deterrence Strategy,” the first by a sitting French president in five years（Macron, Emmanuel 2020）. In it, Macron, emphasizing nuclear deterrent as essential for safeguarding France’s defense, sovereignty, and freedom of action, also called for nuclear disarmament through multilateralism. Remarkably enough, he also called for France’s nuclear weapons to be managed as a jointly-held deterrent for the entire European Union’s collective security. On the other hand, pegging its current stockpile at “under 300” warheads, Macron reaffirmed France’s nuclear posture anchored on two pillars, the nuclear submarine and strategic bomber fleets. This follows President Sarkozy’s earlier statement that “France will reduce its number of warheads to 300 or less” (March 21, 2008) (Sarkozy, Nicolas M. 2008), the commitment François Hollande fulfilled in due course (February 19, 2015) （Hollande, François 2015）. In a document submitted to the 2015 NPT Review Conference (Government of France 2015), France reconfirmed such details in the president’s speech as follows: French warheads below 300; submarine-launched cruise missiles to number 16 per vessel and their ordnance to equate three vessels; and air-launched cruise missiles to total 54. This last figure corresponds to the sum (50) of 40 operational warheads of “Air-launched systems (Bombers, etc.) ” and 10 non-operational stockpiles of “Air-launched systems (Bombers, etc.) ” The figures in this table are derived from Kristensen and others (Kristensen Hans M. & Korda, Matt 2021, as well as Kristensen Hans M. 2020).

To modernize its entire arsenal, France is developing a whole new range of next-generation weapons systems, such as new strategic nuclear submarines (SSBNs), missiles (SLBMs) to be carried by them, and cruise missiles to be launched by aircraft. The French Ministry of Armed Forces’ budget for nuclear arms is thought to have been USD4.9 billion (EUR 4.5 billion) in 2019, a 10% rise over the previous year. Moreover, government announcements estimate that expenditure on nuclear arms over the five years from 2019 to 2023 will be USD28 billion (EUR 25 billion). However, the extent to which this expenditure will cover nuclear armament remains unclear (Kristensen, Hans M. 2020).

Whereas France is a part of NATO, the French nuclear system is independent from the NATO. 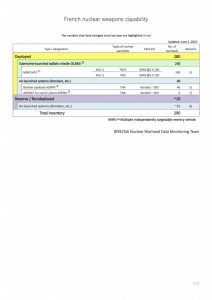 1) The warheads are carried by four Triomphant-class* ballistic missile nuclear submarines (SSBN): Triomphant, Téméraire, Vigilant and Terrible. At least two of these are in a complete state of readiness for action, and one of them is used in deterrent patrols (for approximately 10 weeks). They are based at the Ile Longue, a peninsula near Brest (Kristensen, Hans M. & Korda, Matt 2019).
*Triomphant-class SSBN: The Terrible’s commissioning made the total of four SSBNs on September 20, 2010. They are equipped with 16 missile launch tubes.

2) MSBS is the abbreviation for Mer-Sol Balistique Strategique, French for SLBM. The previous M45, with a range of more than 4,000 km and six-warhead MIRV-capable, completed retirement by the end of 2016. Since then, all four strategic nuclear submarines have been equipped with the M51 (Kristensen, Hans M. & Korda, Matt 2019). The test launches of version M51.1 were carried out on January 27 and July 10, 2010. The test launch of the Vigilant failed on May 5, 2013 (Collin, Jean-Marie 2013). The M51.2 variant was test launched on July 1, 2016 from Le Triomphant and operational deployment was announced in December 2017. It is planned that the missiles carried on all four submarines will be switched to M51.2 by the year 2000. The M51.1 missiles carry up to six TN75 MIRV thermonuclear warheads (with a yield of roughly 100 kilotons) and the M51.2 missiles up to six TNO MIRV thermonuclear warheads (also with a yield of roughly 100 kilotons) (Kristensen, Hans M. 2020). Certain sources put the yield of the TNO as 150 kilotons (Kristensen, Hans M. & Korda, Matt 2019).

*TN75: The thermonuclear warhead that was used in the last French nuclear test in Moruroa in 1995-96. TN is the French abbreviation for Tête Nucléaire (nuclear warhead). They are planned to be changed to TNO from 2015.

3) It is thought that three of the four submarines carry warheads in shifts and one submarine is in overhaul (Kristensen, Hans M. & Korda, Matt 2019), leading to a calculation of three submarines x 16 launch tubes x (four to six) MIRV. This means an average of five MIRV.

4) ASMPA is the abbreviation for Air-Sol Moyenne Portee Ameliore, French for medium range air-to-ground missile. It is a cruise missile with range of 500km. Its warhead is TNS (Tête Nucléaire Aeroporte: Airborne nuclear warhead) and worth up to 300 kt, but lower yield alternatives are thought to be available (Kristensen, Hans M. & Korda, Matt 2019).

5) The nuclear-capable fighter bomber Mirage 2000N was retired in June 2018, leaving some 40 of the Rafale BF3* to continue with nuclear missions. One warhead per aircraft (Kristensen, Hans M. & Korda, Matt 2019).

6) The 10 carrier-based aircraft Rafale MF3* on Charles de Gaulle, the only French aircraft carrier (R91, nuclear powered), carry out nuclear missions (Kristensen, Hans M. & Korda, Matt 2019). In April 2020 around 1,000 of the crew on the Charles de Gaulle aircraft carrier contracted the Covid-19 and the vessel was forced to return to port while on nuclear duty (Simkins J.D. 2020).

7) The aircraft carrier Charles de Gaulle does not usually carry nuclear weapons. The ASMPA for loading on the Rafale MF3 are stored at a terrestrial base, probably the Istres or Avord Air Base (Kristensen, Hans M. & Korda, Matt 2019). In this context, it was categorized to be in reserve (just as we did for China)

8) Approximately 10 warheads for the ASMP-A cruise missile for naval aviation.

Macron, Emmanuel 2020: “Speech of the President of the Republic on the Defense and Deterrence Strategy,” 7th February, 2020, https://www.elysee.fr/emmanuel-macron/2020/02/07/speech-of-the-president-of-the-republic-on-the-defense-and-deterrence-strategy.en (accessed May 3, 2021)