Compared with the U.S. French, and UK nuclear capabilities, Russian capabilities are quite vague. As for the data pertaining to the U.S.-Russia New START Treaty, Russia, unlike the U.S., has not disclosed any breakdown of the number of (deployed/non-deployed) launchers. On March 1, 2021, Russia announced that it possessed a total 517 strategic delivery vehicles and 1,456 deployed strategic nuclear warheads (U.S. Department of State 2021). This chart and the New START Treaty data can be reconciled by replacing the 180 warheads counted under “Strategic bomber payloads” with the estimated number of operational strategic bombers (50) to reduce the number of strategic delivery vehicles and deployed warheads to 512 and 1,470, respectively. Given the general lack of transparency in Russia plus day-to-day changes in deployments, this is thought to be an appropriate estimate.

Russia is attempting to renovate its aging nuclear weapons system, which dates back to the days of the former Soviet Union, and is currently in the mid-term stage of this overall effort. With regard to ICBMs, submarine-launched ballistic missiles (SLBMs) and strategic bombers, the Russian government has stated that the rate of modernization was 86% as of the end of 2020 (Russian Federation 2020-2), and will be over 88% by the end of 2021 (TASS 2021). Russia is in the process of systematically replacing Soviet-era SS-18, -19, and -25 systems with the latest SS-27M2 systems with complete replacement by 2024 (TASS 2020-1). SS-18s are likewise being replaced by the SS-X-29 Sarmats under development. Strategic nuclear submarines and SLBMs will also be replaced by the latest Borei-class submarines and new SLBM Bulava. Elsewhere, Russia’s bombers, cruise missiles and non-strategic nuclear weapons and their launchers are all being modernized.

As a matter of fact, maritime patrols by Russia’s nuclear submarines have gained in frequency in the recent years. However, this Russian fleet comprises about a total 20 submarines per year. Given constraints on submarine patrols, they are believed to be attack nuclear submarines (Kristensen, Hans M. & Norris, Robert S. 2017). Last year Russia conducted the following ballistic tests: one ICBMs and five SLBMs (Space Launch Report 2020). Russia has conducted large-scale military maneuvers involving one ICBM and one SLBM launches. These exercises involve strategic bombers launching long-range cruise missiles (Podvig, Pavel 2020).

In March 2018, President Putin, in a State of Federation address, disclosed the development of a series of new nuclear weapons (Kremlin 2018). Of these, two units with the hypersonic glide vehicle Avangard, delivered on an ICBM and able to penetrate missile defense, were deployed in late 2019 (TASS 2019-3). In addition, the Kinzhal, a hypersonic aeroballistic missile for the Mikoyan MiG-31 interceptor, is believed to be in deployment (TASS 2018-2). The Zircon (also spelt “Tsirkon”) hypersonic cruise missiles launchable from vertical launchers on missile cruisers currently carry conventional warheads, but it is surmised that they could be used to carry nuclear warheads in the future. In addition, Russia is conducting the development of the Poseidon, a large-scale nuclear-armed underwater vehicle with nuclear propulsion, and the Burevestnik, a subsonic nuclear-powered cruise missile capable of carrying one or several nuclear warheads (Hruby, Jill 2019). All this escalation is enough to raise concerns reminiscent of the Cold War nuclear buildup.

Furthermore, in June 2020, Russia announced a document entitled “Basic Principles of State Policy of the Russian Federation on Nuclear Deterrence,” in which it set out its fundamental policy on the use of nuclear weapons (Russian Federation 2020-1). Russia had previously adopted a stance of using nuclear weapons only in the events that it were attacked by nuclear or other weapons of mass destruction, or its existence as a nation was threatened by conventional weapon attacks. The new policy also cites first of all the case of it obtaining “reliable data on a launch of ballistic missiles attacking the territory of the Russian Federation and/or its allies.” This makes no differentiation about whether such attacks involve nuclear warheads or not, and is a clear lowering of the threshold for the use of nuclear weapons on Russia’s part. 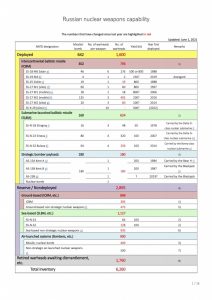 1) This is in line with the latest estimates (Kristensen, Hans M. & Korda, Matt 2021-2). Changes from last year include the exchange at the Barnaul Air Base of nine SS-25 missiles with nine (mobile) SS-27M missiles. The replacement of other SS-25 missiles is underway at Barnaul, with four missiles put in reserve stockpile. Six SS-27M missiles (silos) have also been additionally deployed at the Kozelsk Base (Kristensen, Hans M. & Korda, Matt 2021-1). Elsewhere, the Dombarovsky Air Base has been boosted with the addition of four of the Avangard hypersonic glide vehicle systems (TASS 2020-2). An attempt is being made to extend the lifetime of the SS-19 ICBMs that carry the Avangard (Podvig, Pavel 2020-4).
With a view to complying with the New START Treaty, SS-18s’ warheads are believed to have been reduced from ten to five and SS-27 Mod 2s’ from four to three. These reductions are now in reserve.
One estimate of the total ICBM stockpile puts it at 1,181 (Podvig, Pavel 2020-1) but this is mainly due to differences in the methodology used to account for the SS-25’s upgrading to the road-mobile SS27M2, so there is no material discrepancy.
The SS-X-29, set to replace SS-18s, commenced flight tests in 2021 and will likely begin deployment in 2022 (Russian Federation 2020-2).

3) The estimate (actual number of aircraft tasked for nuclear missions is around 50 aircrafts) for strategic bombers capable of carrying nuclear weapons is placed at 50 (Kristensen, Hans M. & Korda, Matt 2021-1), comprising 14 Bear H6, 7 Bear H16, 18 upgraded Bear H16 and 11 Blackjack aircraft. Since they are capable of carrying six, 16, 14 and 12 cruise missiles, respectively, we calculate a combined 580 warheads available for these strategic bombers to be in operational deployment/reserve. It is thought that in peacetime around 200 missiles are allocated for bombers, but here we put the figure at 180. These are not deployed on bombers, but stored on air bases at Ukrainka (Amur Oblast) and Engels (Saratov Oblast). These are counted as being deployed. The remainder are stored at a central depository and are counted as reserve stockpiles. An estimate for strategic bombers tasked for nuclear assignments is 55 Bear H and 11 Blackjacks for an operational missile total of approximately 200 missiles (Podvig, Pavel 2020-3).

4) Russia’s reserve stockpile consists of warheads not loaded on ICBMs, those stored temporarily out of submarines during overhaul or not allocated to bombers, and non-strategic weapons. These are said to be stored in 48 locations across the Federation (Kristensen, Hans M. & Norris, Robert. 2017). Since the end of the Cold War, Russia’s tactical warheads have been significantly reduced, with current estimates pegging them at some 1,910 (see 475 + 935 + 500 on table). Each warhead, while tagged to a specific launch pad, is not deployed operationally and centrally stored (Kristensen, Hans M. 2021-1). The Russian Foreign Ministry, during the 2014 NPT Preparatory Committee, affirmed that all non-strategic warheads are categorized as nondeployed and assembled at multiple central storage sites (Uliyanov, M. I. 2014). According to a new noteworthy research finding about Russian tactical weapons (Sutyagin, Igor 2012), such concepts as operational deployments, central storages and surpluses need to be redefined, in accordance with the Russian military’s unique operational practices. Sutyagin’s analysis says that, of about 2,000 tactical nuclear weapons, some 1,000 are “operationally allocated” to launch pads and, though not loaded onto delivery means, kept in alert readiness for immediate use. Some of these may be found aboard ships or with ordnance units under the direct command of strike forces. Although this table adheres to Kristensen’s reserve category, large amounts, conceptually, resemble more closely with Kristensen’s operational deployments.

5) There are estimated to be 475 ground-launched tactical nuclear weapons. Of these, defensive missiles account for approximately 360 warheads, anti-air missiles 290 warheads, anti-ballistic missiles 68 warheads, and anti-ship missiles for coastal defense four. On the other hand, Russia has deployed with four units the ground-launched cruise missile SSC-8 (capable of delivering both nuclear or conventional warheads), which the US has alleged to be an INF violation (Army Recognition 2019).

6) There are estimated to be approximately 935 sea-launched tactical nuclear weapons, allocated to warships, submarines, ship-based aircraft, and helicopters. They are made up of anti-ship cruise missiles, anti-submarine rockets, land-attack cruise missiles, torpedoes, and depth charges. Most of the missiles are for dual nuclear and non-nuclear use (Kristensen, Hans M. 2012). Following the US notification to leave the INF, Russia responded by announcing a conversion of the sea-launched Kalibr cruise missiles to a ground-launched variant (TASS 2019-1).

8) With dismantling continuing, warheads retired and to-be-dismantled are now fewer in stock. In the coming years, Russia is expected to continue dismantling at a rate of 200-300 warheads per annum. (Kristensen, Hans M. & Korda, Matt 2021-2).