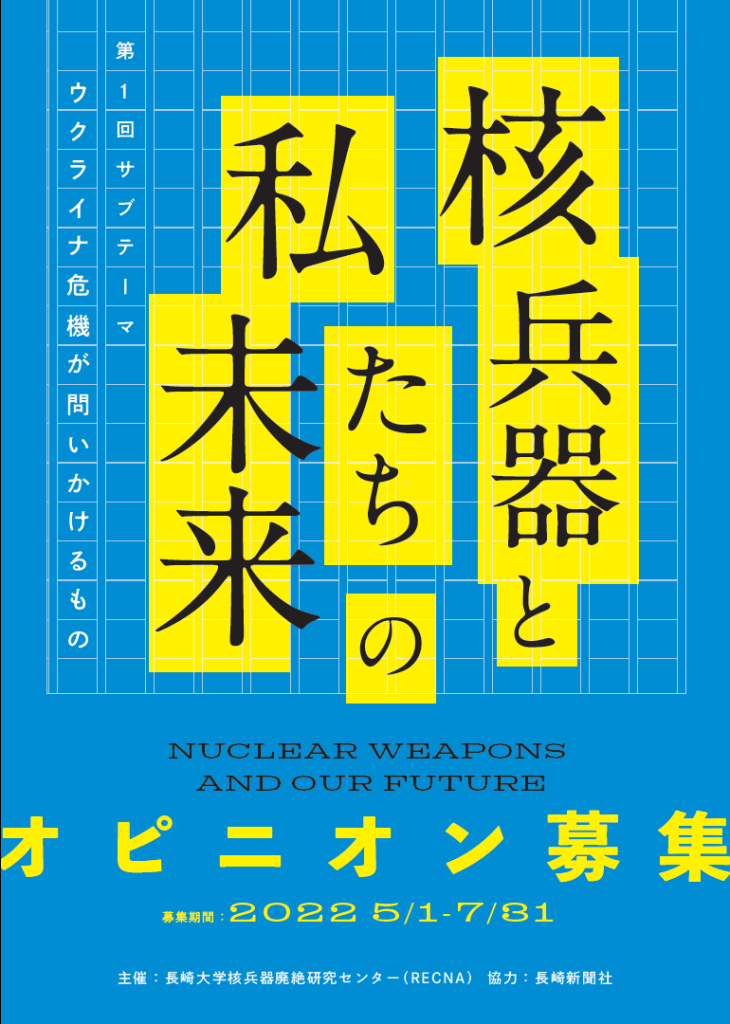 The Research Center for Nuclear Weapons Abolition, Nagasaki University (RECNA) held a call for “opinions” applying to the First Essay Contest on “Nuclear Weapons and Our Future” as one of its 10th anniversary commemorative projects, with the aim of raising awareness of the importance of nuclear weapons issues among the younger generation and fostering human resources who can contribute to the realization of a peaceful international society.

One Grand Prize winner and two Second Prize winners have been selected, and the winners were announced and the Award Ceremony (photos) was held as follows.

The best “opinion” was published in the print version of Nagasaki Shimbun Newspaper on September 25, 2022. This is an article (in Japanese) of the electronic version. 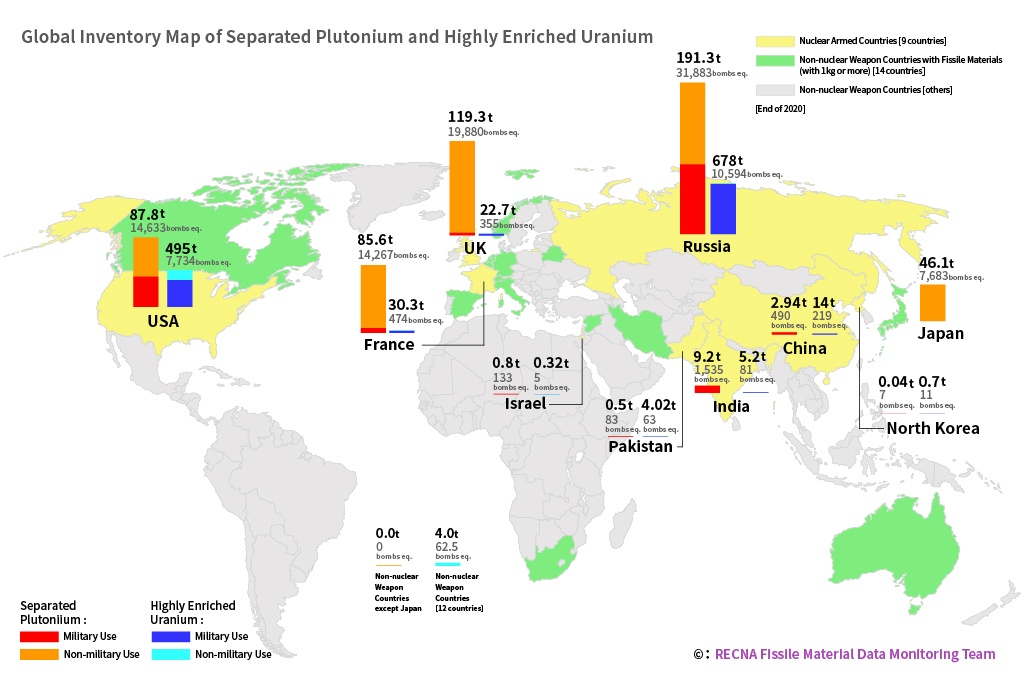 The special feature of this year’s map is that for the first time since we started the publication the aggregate amount has diminished. This is in particular due to the large decline in the amount of highly enriched uranium (HEU) but the amounts of plutonium continue to follow an upward trend. A major drop in the amount of HEU was due to reductions by the US in its military-use HEU and reductions in the amounts in the possession of non-nuclear countries, an amount of 76 tons (equivalent to about 1,220 warheads). The overall rising trend in plutonium continues and although the amount of military-use plutonium has not increased much, the amount of civilian use plutonium in the non-military category (held mainly by France and Japan) rose, leading to a slight increase of the overall amount of plutonium (totaling 6 tons, equivalent to around 950 warheads).

◆ You can see previous “World’s Fissile Material Data” from [All Lists].

◆ The 2022 World’s Nuclear Warheads Data have been published too. You can see them from here.

This report is published under a 4.0 International Creative Commons License the terms of which are found here.

This report is simultaneously published by the Asia-Pacific Leadership Network, Nautilus Institute, and the Research Center for Nuclear Weapons Abolition, Nagasaki University (RECNA).

The views expressed in this report do not necessarily reflect the official policy or position of the Nautilus Institute. Readers should note that Nautilus seeks a diversity of views and opinions on significant topics in order to identify common ground.

In this photo-essay, Michael Roach provides a remarkable account of multigenerational involvement in nuclear war, including a previously unpublished photo of the starboard nose of the Enola Gay bomber that delivered the first atomic bomb and returned to Tinian airfield, showing the inscription “First Atomic Bomb – Hiroshima – August 6, 1945.” Michael Roach and his father, Kenneth Roach, both served in the US Army two decades apart on missions that involved the atomic bomb. The prospect of real atomic warfare in Japan during the 1940s, and potential atomic warfare in Korea during the 1960s, brought their lives together historically, but father and son came away from their experiences with completely different conclusions. This essay sheds light on the US government’s thinking about nuclear weapons, particularly vis-à-vis military operations in Northeast Asia. It outlines the impracticality and risks of the US strategy to use tactical atomic weapons in Korea in the 1960s.

Authors’ Profile:
Michael Roach is a retired renewable energy manager residing in a small Wisconsin farm town surrounded by vast green fields of corn and soybeans. He is currently writing a history of wheat culture using commodity chain analysis. His research is part of a larger project that examines the history of illumination and power technologies, from 18th century whale oil to modern microgrids. He also volunteers his time assisting in the reconstruction of Ukraine using ultra energy efficient modular multifamily housing powered by solar microgrids. He served in US Forces Korea as an Atomic Demolition Munitions engineer in 1968.

Full text (PDF) is here.
The page for this project is here.

Hibakusha Story by a Nagasaki Hibakusha: a Speech at the First Meeting of States Parties to the U.N. Treaty on the Prohibition of Nuclear Weapons

Dr. Masao Tomonaga, Visiting Professor of RECNA, gave a speech at the First Meeting of States Parties to the U.N. Treaty on the Prohibition of Nuclear Weapons in Vienna on June 22. The manuscript provided by the author is posted bellow.

I am a Nagasaki hibakusha encountered the second atomic bomb at 2.5 km from the hypocenter. I was 2 years old. I survived in a crushed Japanese wooden house from which my mother then 20 years old took me out of the broken house. Our area was soon burnt out, getting into completely flat field.

I have no memory of this disaster I encountered. I had no acute symptoms and grew up normally. When I became a high school boy it was the time when leukemia took place at high incidence especially among young Hibakusha. This makes me anxious, I decided to become a physician. I entered Atomic Bomb Disease Institute, Nagasaki University in 1968, since then I continued my research for over 45 years. I observed high incidence of leukemia until 1970ies and the cancer of various organs then followed and continued even until now. Some hibakusha are developing second and third cancers. Thus, the cancer occurrence covers whole life of Hibakusha. Four years ago, finally, I myself suffered from prostate cancer and I’m now under chemoradiotherapy. Thanks to this modern therapy I am enjoying now good health.

We hibakusha never had a calm period relieved from the long-lasting anxiety of cancers and other diseases. We have overcome always such atomic bomb-related obstacles to re-construct our life.

Recent statistics shows an increased incidence of heart attack among aged hibakusha, that is myocardial infarction. Atomic bomb radiation may induce genetic damages, that is DNA damage, to induce not only cancers and leukemia but also cardiovascular disorders. Whole life of hibakusha can be described as a non-stop train, slowly progressive deterioration of their health during their struggle to reestablish their family and houses, that is a resurrection for new life after the bombing. Some hibakusha lost their parents or siblings who were also hibakusha due to cancers, for female hibakusha segregation was severe in finding their partners. Such segregation was especially severe in early period of 20 years after bombing, but later decreased after most hibakusha could establish their own families.

Children born to hibakusha and their parents then encountered a special type anxiety that they might develop malformation or cancers due to genetic transmission from their parents. Such anxiety has been enhanced all the way until now because of the lack of scientific evidence for genetic transmission although animal experiments had often reported positive clear results. Recently my school Nagasaki University Atomic Bomb Disease Institute established a new molecular technique to prove genetic transmission of radiation-induced genetic abnormalities from fathers’ sperm cell and mother’s ova cells to their children. This technique is called whole genome sequencing. The first trial of this molecular analysis using three pairs of high-dose exposure parents and their children ended in negative results. This technique might be the last and determinative one to draw a conclusion in this genetic matter of atomic bone radiation on human being. Our hibakusha population is in the final stage of constant shrinkage. In their final stage of hibakusha life they were very happy to see TPNW finally established in 2017 and got into power in 2021. However, we hibakusha has deeply disappointed to the fact 9 nuclear states and over 30 states which depend on nuclear weapons of allied states, especially Japan as only atomic bomb affected nation in the world is being protected by the nuclear umbrella from the allied nation, USA. We feel very sad for our country Japan depends on the nuclear weapons: We are crying.

We feel very sad to see this dilemma and high wall we need to overcome to realize a nuclear-free world before all hibakusha die and disappear from the world. Before leaving our life as hibakusha, the first human being encountered the first and second atomic bomb attack would like again to say the bombings were indiscriminative without prewarning, during work time for detonation, the selection of two cities as targets were suitably populated to examine the effect of atomic bombs on human beings, We ask world citizens to understand our life seriously. Especially we would like to pray for not seeing the genetic radiation effect over to our descendants.

I stop my talk here, thank you for attention.

H.E. Ms. Annalena Baerbock, Federal Minister for Foreign Affairs of Germany, will visit Nagasaki on July 10, the Prefecture and the City of Nagasaki announced. The visit precedes her meeting with Foreign Minister Yoshimasa Hayashi in Tokyo. In Nagasaki, her visit to the Nagasaki Atomic Bomb Museum, offering flowers at the Nagasaki National Peace Memorial Hall for the Atomic Bomb Victims, and meeting with a hibakusha, an Atomic Bomb survivor, have been scheduled. As the crisis in Ukraine raises concerns about the use of nuclear weapons, it has become increasingly important to focus attention on such weapons’ inhumanity. As an academic center in the A-bombed city, RECNA sincerely welcomes her visit.

Germany attended the First Meeting of States Parties to the Treaty on the Prohibition of Nuclear Weapons (TPNW), held in Vienna from June 21 to June 23, as an observer country. Together with the Netherlands, Norway, and Belgium, Germany was one of the few member states of the North Atlantic Treaty Organization (NATO), which is a self-declared “nuclear alliance,” to participate the meeting as an observer.

In his statement issued at the meeting1, the German ambassador noted the importance of the “humanitarian perspective” and reiterated his country’s commitment to “engaging in constructive dialogue and exploring opportunities for practical cooperation.” He also stressed that “broader attention and engagement” should be given to the issue of “victim assistance and environmental remediation” stipulated in Articles 6 and 7 of the TPNW. As the “Vienna Action Plan” adopted by the States Parties of the TPNW calls for greater dialogue and cooperation with states outside of the treaty, Germany’s positive stance gives hope for new developments in the future. We hope that Germany will be a leader in drawing the nuclear armed states and countries under the nuclear umbrella, including Japan, to “constructive dialogue.”

Germany, together with Japan, as core states of the “Non-Proliferation and Disarmament Initiative (NPDI)” and the “Stockholm Initiative for Nuclear Disarmament,” have an important role to play in determining the success of the NPT Review Conference to be held from August 1 to August 26. We look forward to further initiatives and actions by Germany to advance nuclear disarmament. Next year, Japan takes over the G7 Presidency and the summit will be held in Hiroshima. We hope that Germany, which holds this year’s Presidency, will strengthen its cooperation with Japan so that the G7 Heads of State and Government can demonstrate their strong will to realize a “world without nuclear weapons” at the Hiroshima summit. As part of this effort, we strongly request that the Meeting of the G7 Foreign Ministers be held in Nagasaki as an opportunity to further expand awareness of the inhumanity of nuclear weapons.